We are the vanguard of the great journey 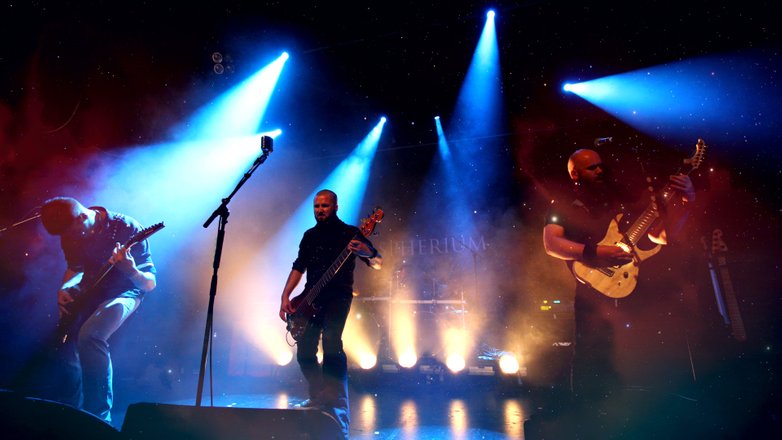 Aspherium is a progressive death metal band from Norway. Blending death and thrash metal with modern elements, black metal riffs and melodic and mellow passages. Their albums are concept albums tackling both post apocalyptic and sci fi themes, focusing on the real horrors we face in the world today, but weaving them into a fictional universe.

Formed in 2007, they quickly made the demo "The Lingering Animosity". At the time the band was a three piece, Marius Skarsem Pedersen on guitars and vocals, Bjørn Tore Erlandsen on drums and Torgeir Lyby Pettersen on bass.

Finding a second guitar player was not easy, but finally they found Morten Ranger Nielsen in 2009. The band could finally start performing live, and did many shows before recording the debut album "The Veil of Serenity" that was released in 2011. The album got great reviews and got the band a bit of attention in the underground scene. The band did more live shows, including festivals and playing with bands like Susperia, Ihsahn and Satyricon and a tour in Europe with Blood Red Throne.

On the second album "The Fall of Therenia" the band worked with renowned producer and mixer Jens Bogren at Fascination Street Studios, and the album launched in 2014 to glowing reviews. This got the band on two tours with the legendary band Decapitated and got them slots at big festivals.

The third Aspherium release, The Embers of Eternity was released September 23. 2019 to glowing reviews and a short Norwegian tour. The third album brings us back to our own planet, and takes a look at a future where our planet has been destroyed by the hand of humanity. A melancholic and epic album, the band focused on crafting a concept album that flows seemlessly together creating a soundtrack to the dystopian setting of the concept. The album features more use of clean vocals, and more is more varied overall. More use of keyboards and percussion is also implemented. A lot of details and ear candy is here for the perceptive listener. This is an album where you will pick up new details you didn't notice for a long time.

Get updates on what we're up to by following us on social media.

The journey is a lie!